The Spanish documentary, The Silence of Others, about the crimes perpetrated by Franco during his 40-year dictatorship and the long drawn-out struggle for justice by victims and their descendants, was shown on BBC TV last week. Several of my friends in the UK told me how moved they had been, watching it. Having already seen the film, I was not surprised at their reactions. It is harrowing. The grief and in some cases bitterness of those interviewed – survivors and relatives of those imprisoned, tortured, executed, disappeared – is still raw decades later. There has been no reconciliation process in Spain, no apology or admission of wrongdoing, let alone prosecution, no attempt at any kind of reparation. The ‘pact of silence’ agreed in 1977 during the transition to democracy that took place after Franco’s death swept all the crimes of those years under the carpet. The silence continues. Forbidden to pursue their case in Spain, the victims are now relying on the Argentinian courts under the law of universal jurisdiction for crimes against humanity. Some progress has been made. Arrest warrants have at last been issued against some of the alleged perpetrators, including torturers, former cabinet ministers and doctors involved in cases of stolen children.

The film includes interviews gathered over six years with those who were imprisoned and/or tortured, those who have family members lying abandoned in mass graves and with women whose babies were stolen from them during the long years of the dictatorship. Their stories are heartbreaking. How must it feel to see your torturer walking free in your own neighbourhood? To be unable to honour your deceased loved ones by giving them a decent burial? To know your stolen child exists but be unable to trace them? The documentary mentions the ‘red gene’ – the theory put forward by Franco’s chief of psychiatric services, Antonio Vallejo Nájera that gave the title to my recent novel.

Vallejo Nájera (sometimes referred to as Spain’s Mengele) was born in Palencia in 1889. He was sent to the Spanish Embassy in Berlin in 1917 and became a great admirer of the Nazis and their eugenics theories. After returning to Spain in 1930, he set up psychiatric clinics and later conducted experiments on Republican prisoners, including some from the International Brigades. He argued that Marxists, anarchists and anyone who supported freedom or equality was suffering from a pathological condition. The men, he said, were of low intelligence, while ‘red’ women participated in politics only to satisfy their sexual appetites. They were degenerate, given to delinquency and a marked sadistic nature that allowed their animal instincts to be unleashed. Reasons for their high level of participation in Marxist politics were found in their characteristic mental instability, poor resistance to outside influences and lack of control over their personalities. “When the brakes that normally contain women in society disappear, it awakens in the female sex the instinct for cruelty, surpassing all imagined possibilities, by removing intelligent and logical inhibitions and giving way to feminine cruelty that is not satisfied with merely committing the crime but grows stronger in the execution of it.” 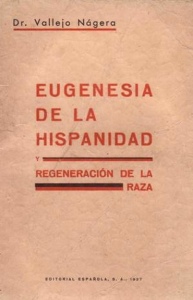 Re-education of Republican prisoners, both male and female was therefore essential. According to him, order, discipline, personal sacrifice and punctiliousness in service defined the Spanish race or spirit and in order to improve it, schools, universities, workplaces, cafes, theatres and all social spheres should be militarised and strict rules be imposed on women.

It was Vallejo Nájera who gave a pseudo-scientific justification for removing the babies of Republican women from them at, or soon after, birth. He argued that it was the only way of eradicating or curing the ‘red gene’. It would avoid contaminating the children with the evil of their mothers and ensure that the Spanish race remained pure, thus liberating society of a terrible plague. His views on women obviously chimed well with those of Franco and the Falange: women’s sole function in life was to bring up their offspring. This would perpetuate their mental inferiority; what intelligence they had would naturally atrophy.

In writing The Red Gene, I wanted to bring home the dangers of fascism at a time when extreme right parties are gaining popularity in a growing number of countries. I chose to do so not by writing about politics but through the story of one family caught up in such inhumane practices as those perpetrated in Franco’s Spain. Up to 300,000 babies were stolen between 1939 and the 1990s (ideological motives later gave way to greed). In most cases, the mothers were told their babies had died. The Red Gene is fiction but true to its time and its context. It’s a story I feel could well have happened.