An exhibition currently on in Madrid and well worth seeing tells the sad story of the half million Spaniards on the losing side of the Civil War who fled Spain in early 1939 to avoid living under a fascist regime that threatened harsh reprisals for those with Republican sympathies. Some of those who escaped spent the rest of their lives in exile, dying before a safe return was possible; others remained until the death of Franco nearly forty years later. The great majority fled to France but South and Central American countries like Mexico, Chile and Argentina also took in refugees, while the US and some other European countries admitted smaller numbers.

A lucky few managed to get on boats, most from the port of Alicante. Notable among them was the Stanbrook, captained by a Welshman, Archibald Dickson, who ditched his cargo and and massively overloaded his ship by taking on board some 3,000 desperate refugees. Risking missile attacks from enemy destroyers blockading the port, the heeling Stanbrook cast off, eventually arriving in Oran, Algeria, where the passengers were quarantined for a month in dire conditions before being allowed to disembark. Far more – many thousands – were left stranded at the port of Alicante after the last ship had departed. With all hope lost and knowing their likely fate, some committed suicide. Those who remained when Italian troops arrived soon after were herded to makeshift camps, where many died from starvation, disease, beatings or forced labour in the salt marshes. 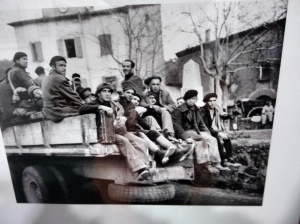 But the vast majority left on foot, on donkeys or mules or on lorries, braving the snow-covered Pyrenees between Andorra and the Mediterranean, often using goat tracks and smugglers’ routes to reach one of the passes still open and cross into France, while others attempted to reach the border by coastal routes. The French police and military disarmed and registered the Republican soldiers, directing them to concentration camps on the beaches of Argelès-sur-Mer and Saint Cyprién. As the photos show, the lack of shelter meant they had to dig holes in the beach for protection from the elements. They were hardly sufficient against the cold and rain of winter and many died of disease, starvation or exposure. The injured or sick and the majority of women and children were gradually evacuated to refuges scattered across the country but thousands remained trapped in the camps of the eastern Pyrenees or were sent to others established further west.

The luckiest were those who made it to France and boarded one of the boats sent by Mexico to rescue Spaniards from the camps there. The first, the Sinaia, sailed from Sète in 1939; later others followed. Mexico was one of the few countries to not only accept but welcome Spanish Republican refugees. When the Sinaia landed in Veracruz, the passengers were greeted as heroes and helped to settle there.

The curator of the exhibition 1939 Exilio Republicano Español, Juan Manuel Bonet, sees it as ‘an exercise in memory’ and a chance to reflect on all that was lost when half a million people escaped over the border. It portrays in written testimonies, photographs, artworks, posters and sound archives the trauma and the physical hardships suffered by these refugees. Along with photographs by Robert Capa of the retreat, known as La Retirada, and those taken by Francesc Boix in Mauthausen, where seven thousand of the Spaniards who escaped to France were later sent at Franco’s bidding, are physical objects: spectacles, a spoon, a penknife; a suitcase belonging to one of the few survivors and kept by his daughter. Equally moving are twenty-two compositions by Pierre Gonnard that consist of photographic portraits accompanied by testimonies of those who were children in 1939, remembering the flight of their families and talking about their lives in exile in France.

Among the exiles were well-known artists and writers, scientists and intellectuals, including Picasso and the poet Antonio Machado, who died in the French Pyrenees only three weeks after crossing the border. Manuel Azaña, last President of the 2nd Republic also died in France: the Republican flag that covered his coffin is on display alongside his desk. The collection of paintings, sketches and sculptures includes a couple of works by Picasso, others by Granell, Gaya, Fenosa and many more. Dozens of books are also displayed: the poems of Alberti and Ayala, the writings of philosopher María Zambrano, among many more. Picasso’s Guernica had been taken to safety in New York; there are images of its return to Spain in 1981 during the ‘Transition’ after Franco’s death. One section of the exhibition highlights the work of Frenchman Philippe Gaussot, a left-wing Christian who helped rescue Republican women and children and, with the cooperation of a Catholic Aid Committee, set up safe colonies for the children in France.

Also featured is the story of the 3,000 children from Republican families who were evacuated to Russia early on in the Civil War, sent by their parents, who feared for their safety in Spain. Little did they know that until 1956, none of them would be permitted to leave the USSR and return to Spain or see their families. They lived and studied in special refuges and after World War II, started work in various jobs and professions. Some stayed permanently in Russia, others returned with half-Spanish half-Russian identities, trapped between two countries, two ideologies and two languages. The exhibition in Madrid includes written testimonies from some of them.

Britain too had played a part by evacuating Basque children and bringing them to Britain after the bombing of Guernica. In 1937, the Habana, an old cruise liner, sailed from Bilbao to Southampton with nearly 4,000 child refugees on board. The Prime Minister, Stanley Baldwin, had been reluctant but public opinion forced him to change his mind. Even then, permission was only granted after the refugee committees organising the rescue had accepted responsibility for the upkeep of the children. They were accommodated in camps set up in several different towns in England and received support from many local people. However, on the whole, Britain stuck solidly by the non-intervention treaty it had signed. If (like Germany and Italy), it had chosen not to, the outcome of the Civil War might have been very different.