When I arrived, after a long drive up a dusty track, at my friend’s finca high up in the Sierra Nevada, I had a strong sense of déjà vu. I knew this place – or so I felt, though I had never set foot there before. It struck me as slightly uncanny because what I was seeing was a scene I had invented: the setting of a part of my novel, The Red Gene. The part where Rose and Miguel, shortly before the end of the Civil War, head to the mountains and join with other fugitives and guerrillas to lead a precarious life in the wild. They sleep in makeshift shelters under the trees, washing in rivers or waterfalls, moving on every few days to evade the Civil Guard.

“They were in hilly country now, making their way through vegetation of holm oak, juniper and pine. Above them, rocky outcrops stood out against a deep blue sky while below, narrow river valleys threaded the landscape with silver. The walking was harder here and several times Rose stumbled on a rock or tree root or missed her footing on loose earth and stones. Although Eduardo said nothing, at times she sensed his impatience. They were heading towards his village of Beas de Segura. He knew people there, they would be safer, he said.

Often they saw no one all day. At night they slept on beds of dry leaves in hollows between the trees, wrapping themselves in blankets and huddling all three together for more warmth. They washed when they could, in rivers studded with boulders. One afternoon they stopped at a waterfall where the cascade gushed into a deep clear pool. The men stripped off and stood for a few seconds under the full force of the torrent. After dipping her feet in the pool, Rose washed the rest of her body as best she could without immersing herself. The water was icy.” 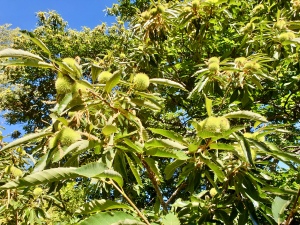 The finca where I spent the weekend extended to 5,000 square metres of land among chestnut woods at an altitude of 1,700m. Rose and Miguel were in the Sierras of Segura and Cazorla, further north in Andalucía and not as high, but with much in common in terms of flora and fauna. In this part of the Sierra Nevada, chestnut predominated, along with walnut, wild cherry and other deciduous trees, especially holm oak, but also evergreens like Scots pine. Blackberry and hawthorn grew wild everywhere, as they do in the other sierras of Andalucía, though the berries I gorged on this month would not have been ripe for Rose and Miguel in the winter and early spring of their exile. Owls and large raptors like eagles and vultures are common in all these mountainous areas. Among the small animals to be found are squirrels, rabbits, hares, weasels and foxes; wild boar are rarely far away. We walked – or rather – clambered up steep slopes of loose earth to a waterfall that could almost have been the one I described above. 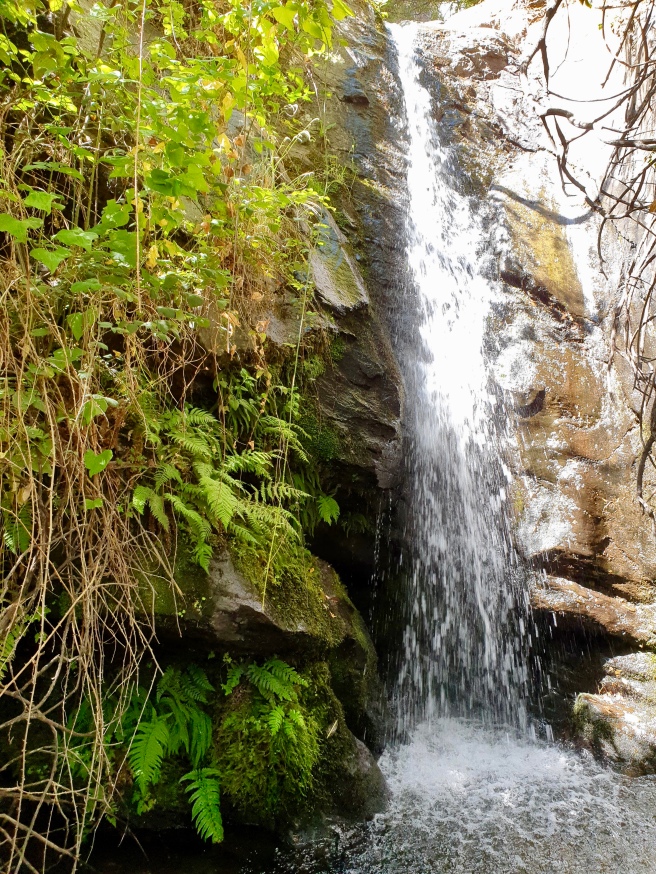 In contrast to my protagonists, we enjoyed relative luxury, with tents to sleep in and running water. A showerhead, connected by hosepipes to a water barrel, hung from a tree. Cooking facilities consisted of a wood oven built of brick and a hob with bottled gas, while a campfire kept us warm on cold evenings and early mornings. A natural spring gushed from the rocks, providing us with the purest drinking water. But although we had these comforts and were not living in fear of the Guardia Civíl, we were, like Rose and Miguel, living an outdoor life surrounded by nature in what seemed a timeless environment. As I sat by the campfire listening to the rattle of the cicadas (the Spanish word grillo is much more onomatopoeic), I thought of them and their maquis companions, unable to take the risk of lighting fires, constantly having to move on. 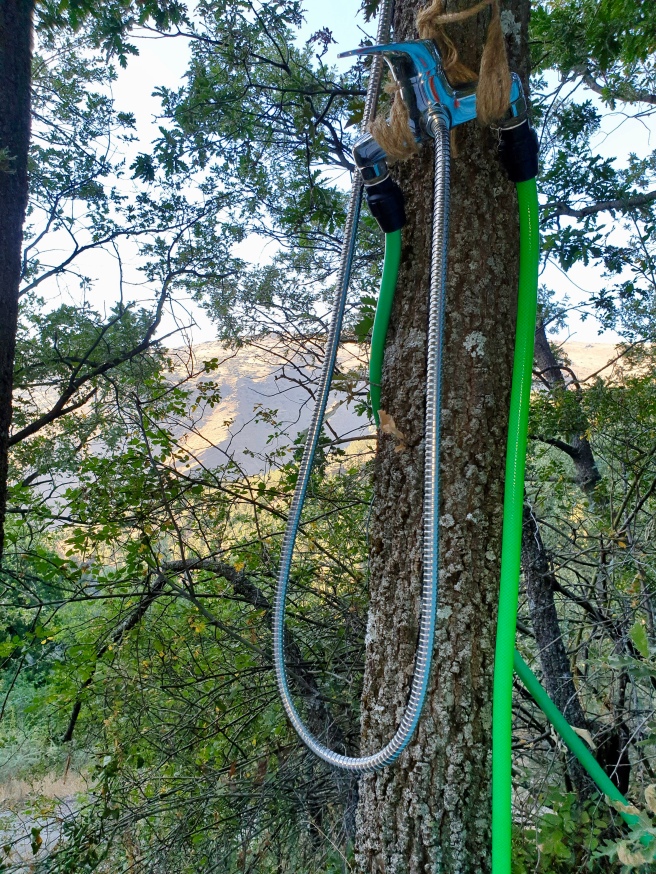 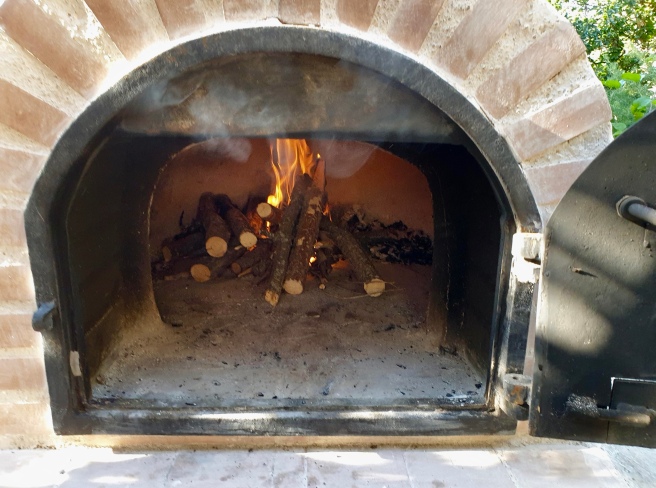 At one point we had a conversation about bird calls and my friend’s imitations reminded me once again of a scene in my book.

“Now Rose and the two men were on the move again, better armed and provisioned, more cautious. News had reached them of the rebels’ entry into Madrid. Any day now, Franco would be in control of the whole country; the war would be over and their situation infinitely more dangerous.

‘We’ll have to move by night,’ Eduardo told her. ‘In silence. No talking, no coughing, no snapping of twigs underfoot. During the day we stay hidden. Do you understand?’

Catching the tension in his voice and demeanour, Rose nodded. ‘I understand.’

‘You need to learn the signals,’ he said. Putting his hands to his mouth, he imitated the call of an owl, followed by that of a hoopoe. Even the birds would be deceived, Rose thought, impressed.

‘Practise until you get it right every time. And make sure you can recognise them too.’ She listened carefully as he explained their interpretation: how many repetitions, how long the interval between them… ‘Getting it wrong could mean death,’ he added.”

A weekend in such an environment, isolated from the world with no mobile signal or internet, none of the usual trappings of civilisation, far removed from all my familiar routines, away from the eternal talk of coronavirus and its accompanying anxieties, a weekend outside time, enveloped in the peace and beauty of nature brought a kind of euphoria, an immense sense of relief. And yet, adjusting to such a change wasn’t easy. Learning to do nothing and just be demanded concentrated effort. And then, all too soon, it was time to return to ‘normal’ life. Normal life, but with some essence of what I had experienced, a nourishing peace, remaining with me. 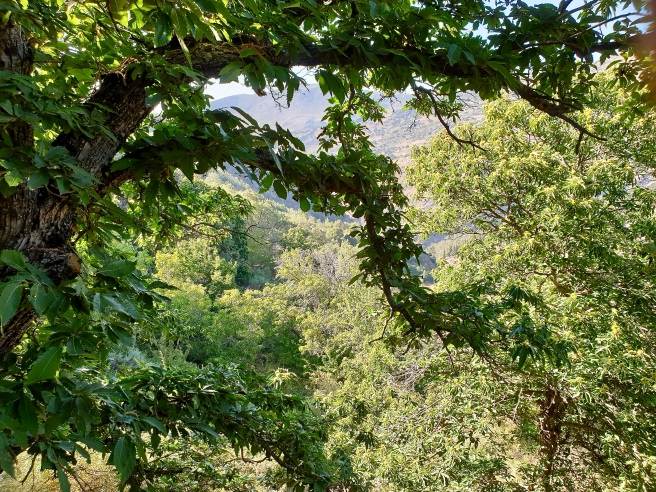 For Rose and Miguel the ending was very different.