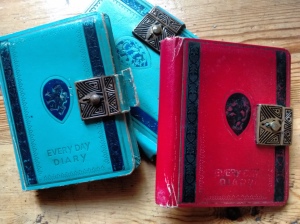 It had to happen. The teenage diaries still lurking in my barely accessible loft had to be retrieved. Not only retrieved but read. Oh horror. Not only retrieved and read but destroyed. Pronto! I opened the box and there they were: pages and pages of excruciating writings that detailed the emotional agonies of my teenage years. I remember so clearly the satisfaction of buying those ‘lock-up’ diaries; I even remember where I used to hide the key. Last week (with the key long lost), I discovered just how easy it was to tear the plastic-covered cardboard tab that made of that key a complete nonsense.

If I ever write a memoir or a novel set in the 1960s with a teenage girl as protagonist, I might regret ripping those pages to shreds and disposing of them. Otherwise, my only feeling will be one of relief. The thought of anyone else reading them – even after my death – appals me. They were never meant to be read, and certainly not by my children. Diaries are mostly a therapeutic exercise – and a very effective one too.

At fourteen, the content was boring and banal. Did my homework. Practised the piano. Helped. (Had my mother written a journal, I don’t think she would have considered my ‘help’ worth a mention.). Resentment towards my parents for setting bounds to my liberty pervaded the diaries. At fifteen the youth club became the highlight of my week. Boys’ names surrounded by hearts began to feature heavily. From then on pain oozed from the pages. My heart was broken with depressing regularity. From the long list of boys I ‘snogged’ over the next few years, no one would guess how innocent I actually was. When I met my husband-to-be at nineteen, I was still a virgin. (So was he.) No drugs either, just a few ‘ciggies’ and the odd alcoholic drink. The sixties didn’t really swing very much for me.

There were later diaries too: happiness but also more heartache, more setbacks in the search for love. How much had changed? What had I learnt? What had I still to learn? As I chronicled the highs and lows of my thirties, forties, fifties, the patterns seemed to repeat themselves over and over. Without the innocence. Too revealing by far, these diaries also had to be consigned to oblivion.

Diaries have featured prominently in two of my novels. Violet Bradshaw, the protagonist of Diary of a Wrinkly Rebel, was a woman of 79, living in a sheltered dwelling in England’s Midlands in the early 1980s just after Thatcher’s downfall. Feisty and determined, she struggled with the humiliations imposed by physical disability and a low income, but her sense of humour and spirit shone through her diary. Violet was inspired by some of the older women I met while working in the community. She certainly wasn’t me.

Neither was Deborah in Secrets of the Pomegranate, although some of her experiences, for example, buying and renovating a house in the Albaicín, coincided with mine. None of what happened to her in the story mirrors events in my own life and her personality is completely different from mine. Perhaps, imagining my own likely reaction, I felt a spark of indignation on her behalf when her sister Alice invaded her privacy by reading the diaries she left – though without them, the novel would have been poorer, reflecting only other characters’ views of Deborah.

“Alice knew she shouldn’t be reading the diaries, not while Deb was still alive. She had opened the first notebook intending just a peek at the earliest days before replacing all six books in the shoebox and returning it to the back of the filing cabinet. But once she’d started, the words seemed to hypnotise her, compelling her to read on. The words were Deborah. Alice could hear her voice, see her in the apartment, in the market place… Reading these pages brought her sister closer. Deb would forgive her, surely?”

People are often curious as to whether what I write is autobiographical. Undoubtedly, there is something of me in all my characters, young or old, male or female, but I write novels, not memoirs. My travel books were based on personal experience but I am far too private a person to share the more intimate feelings revealed by a diary. Safely disguised in fiction, I can process my experience in other ways through the creation of characters very different from me but who still share the basic emotions common to all of us. One of the reviewers of Secrets of the Pomegranate made the comment: ‘This is writing by someone who understands people’. I regard it as one of the best compliments a writer could receive. Thank you, buzzsmith.