In my novel The Red Gene, Consuelo, born in 1939 soon after the start of Franco’s dictatorship and brought up in a family of the landed class fully supportive of his regime, has limited access to books. As a child, her reading matter is restricted to religious works like Lives of the Spanish Saints and approved classics such as Don Quixote. Later, her somewhat subversive sister-in-law passes her a handful of novels banned by the censor and smuggled in from Mexico, among them Gulliver’s Travels and Portrait of Dorian Gray. Romantic serials in women’s magazines and romance novels by prolific author Corin Tellado formed the reading diet of most women – if they read at all. Illiteracy levels, especially among women, were shockingly high until as late as the 1970s.

Censorship under Franco was imposed on literature, radio, film and television, music and public performances. The great majority of books submitted to the censor for approval were banned. The Falange and the Church had direct control of the process, acceptance being subject to conformity with Franco’s political ideology and with Catholic morality. At the end of the Civil War, most of the intellectuals and artists who had defended the Republic – those who had not been imprisoned or killed – had gone into exile. In terms of culture and art, it was a bleak time. Those whose creative endeavours were not inspired by the principles of Francoism – exalting the military ethos, Spanish nationalism and fundamentalist Catholicism – were liable to be persecuted.

Unsurprisingly, the Press came in for particularly strict curbs. Franco’s brother-in-law, Ramón Serrano Suñer, was placed in charge of press and propaganda. His Interior Ministry controlled all types of publication so that the news could be manipulated and used as a means of spreading propaganda. Republicans and communists were to be reviled. For example, at the end of World War II, newspapers were encouraged to play down Russia’s victories over the Nazis but extol those of the Americans and British. The directors of each newspaper were appointed by the regime and only approved journalists were issued with the press cards required to practise their profession. ‘Informative’ texts were sent out for obligatory insertion in the media. ‘Fake news’ is nothing new. The only written medium to escape government censorship was the magazine Ecclesia, the organ of the Episcopate and Acción Católica. In the issue of March 1944, they advised: No se debe leer, más que por inmoral, que lo es bastante, por repulsivamente realista. Reading was discouraged for its ‘repugnant realism’ as well as its immorality. 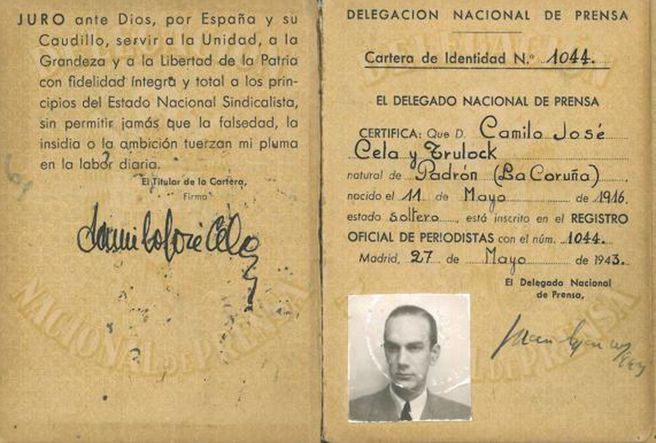 The censors, well paid by the Ministry, had to read every publication from beginning to end and indicate any part that infringed the law. To begin with, they were academics close to the regime. Later the task fell to untrained functionaries or in some cases writers (Camilo José Cela was one; ironically his own novel La Colmena, The Beehive, was banned in Spain until 1955 and had to be published first in Argentina). In the absence of any clear judicial guidelines, much depended on the personal prejudices – ideological or moral – of the particular censor and on his character or his state of mind at the time. It was the job of the illustrators of magazines and newspapers to retouch any drawings or photographs so that they complied with the requirements of Francoism and the Church. Usually but not always this involved the female figure.

Radio Nacional España had a complete monopoly on broadcast news. However, at the suggestion of Dolores Ibárruri, ‘La Pasionaria’, the Spanish Communist Party set up a clandestine radio station, Radio España Independiente. Broadcasting from Moscow (and later Bucharest) every day between 1941 and 1977, it brought news from the BBC and Radio Francia Internacional in Spanish and was known as La Pirenaica, to give the impression it came from somewhere closer (the Pyrenees). Merely daring to tune in to the station was considered a sign of opposition to Franco. In The Red Gene, the local pharmacist in Consuelo’s community is arrested and imprisoned for many years after being caught listening to La Pirenaica.

Films, especially foreign films, were an obvious target for censorship. Moral, religious and ideological content was tightly controlled, which frequently meant cutting scenes and manipulating dialogue (dubbing provided the perfect opportunity for this). Sexual content came in for particular attention. Actresses had their busts reduced and the necklines of their dresses raised so as not to scandalise their audience. Certain terms were forbidden, such as the words for thigh or groin or for items of underwear. ‘Lewd’ kissing, over-effusive demonstrations of affection, states of undress, uninhibited dancing, divorce and adultery were among the objects of the censor’s scissors. This was at times taken to extremes. For example, in the 1953 John Ford film Mogambo, starring Clark Gable, Ava Gardner, Donald Sinden and Grace Kelly, dubbing transformed the lovers into brother and sister – a change that left Spanish viewers watching the original footage somewhat puzzled. Adultery had given way to incest. During the early years of the regime, any actor or director who had expressed sympathy for the Republic was blacklisted. The list included twenty-nine Hollywood stars, among them Charlie Chaplin, Bette Davis and Joan Crawford.

Theatre and music were similarly controlled. Theatre companies had to subject their plays to the Board of Censorship for Theatrical Works, which could change dialogue or entire scenes or ban the work completely, besides changing details of the set design, the costumes or the sound track. With regard to music, some Spanish artists were considered a danger to the regime and blacklisted, while foreign singers and groups were strictly censored. Four million songs were vetoed on radio and television; album covers like the Rolling Stones’ Sticky Fingers, the Who’s Quadrophenia and David Bowie’s The Man who Sold the World were embargoed.

Another form of censorship was the prohibition of regional languages in favour of castellano and the repression of regional cultures in order to impose national uniformity. This often involved manipulating history so that it bore little relation to the facts. Journalists in any case had little opportunity to inform their readers truthfully. As everything had to pass through the filter of Francoism, citizens were offered only a partial view of reality. In 1966, the Press Law of 1938 was replaced by the Fraga Law, named after the Minister of Information, Manuel Fraga. Although the new law appeared more liberal, in practice transgression could result in financial sanctions, confiscation of editions or closing down a publication completely, creating a climate of self-censorship among writers and editors. Only after Franco’s death was censorship finally abolished.